A small wing of Dorchester County Hospital has been named after one of the ‘fighting Sydenham brothers’, the third born, Thomas.

He was a Cornet in his older brother, Francis’ regiment of horse after leaving his medical studies in Magdalen College Oxgford at the outbreak of hostilities to fight along side his older siblings in the Parliamentary cause.

Wounded in the fight to re-capture the Chapel Fort on the 9th February 1645, he would have been one of the soldiers carrying Francis’ stricken body back down into Weymouth where he died a few hours later.

Later in the wars, Thomas was attacked one night in his quarters by a drunken soldier who put a pistol to his face and pulled the trigger. But the weapon mis-fired and only succeeded in badly damaging the man’s hand.

This was a fortunate thing, for after the wars, Thomas resumed his studies and became a doctor of such repute, that he was known as the “English Hypocrites’.

A fellow physician, John Brown wrote of him, “He is the Prince of Practical Medicine, whose character is as beautiful and as genuinely English as his name”.
Thomas Sydenham believed that nature had a cure for all of man’s ailments and that physicians were merely nature’s assistants. One of his few recorded quotes was “Of all the remedies it has pleased almighty God to give man to relieve his suffering; none is so universal and so efficacious as opium.”

Among his many achievements was the discovery and identification of a disease which became known as ‘Sydenham’s Chorea”. We know it today as St Vitus Dance. In 1659, he was nominated for Parliament, but not elected.

A memorial to Dr Thomas Sydenham, which was erected in the 19th century by the now defunct ‘Sydenham Society’, can be found halfway up a staircase in St James Church, Pall Mall. The staff there being completely unaware of who this great Dorset man of medicine was.
After a brilliant career, he died of gout, aged 65, at his home in Pall Mall, on the 29th December 1689. He is buried in St James Churchyard, Piccadilly.

This great Dorset family, whose sons gave so much for their County and Country, have for too long now been forgotten, lost in a side alley of English History.

This book, Blog and the Crabchurch Weekend, seek to reverse this fortune and 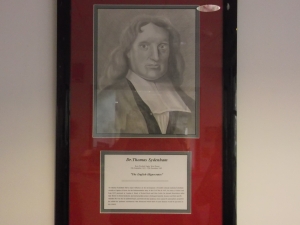 Naive, but charming portrait of Thomas, with a small bio situated in the Dr Thomas Sydenham block of Dorchester Hospital.